I’ve got a clear stamps-specific trick for you today. 🙂

First, take a look this picture of my card and stamping sample:

I like to call my trick the “Shadow Text” technique.

Say what, you say?

It’s where get that layered look you see on the card.

Here’s how I got it:

* Next, I stamped the sentiment a second time, slightly to the left of the original stamping, with a darker ink. In this case, I used black ink.

I probably could have achieved a similar look with a rubber stamp. But here is why using  clear stamps was an advantage for me: I could see exactly where I was stamping. So well in fact that I was able to position the stamp so a little to the side of the first image so I got a complete shadow effect with little hassle.

Know that I’ll never give up rubber stamps.

But, that said, it’s tricks like this that make me completely dig clear stamps, too.

So I totally go in  phrases when it comes to crafting.

There are times when I am all about robots.

There are times when I am all about flowers.

And yet there are times when I am all about motifs.

And, for the last couple months, it’s been about butterflies. Add one here. Add another there. And, yeah, everything is all good in the world. 🙂

So, hmmm, what’s sparked this interest? I don’t really know… other than like… yeah… I totally dig using them.

Punches, stamps, papers with them… and all.

Meet one of my latest cards:

It uses not just one, but TWO, of the wonderful little things (These are from American Crafts).

Gotta admit that I am thinking, I might be on this butterfly kick for a little longer.

This is a card I created for the April/May issue of Paper Crafts: 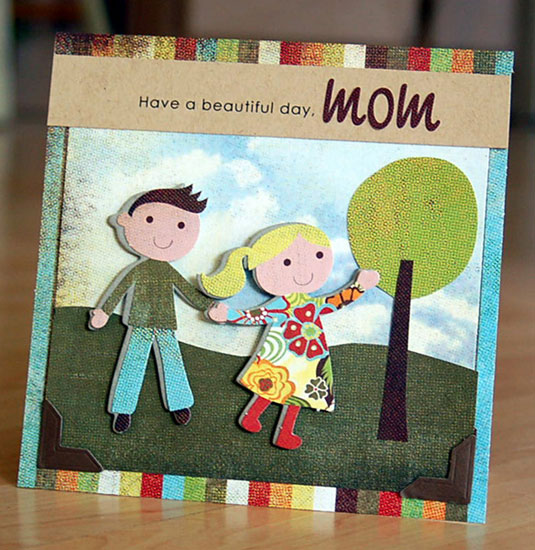 Even though my name is on it, I feel real strong that I am not the only person behind it.

See, Cath, PC’s creative editor/resident trendwatcher/overall paper crafting smart cookie,  approached me about working on it about it back in October. She had this idea of making a Mother’s Day card using chipboard kids from Basic Grey. She thought it would neat to also to have two kids touch hands on the card.

Call me a softy. Go ahead. Cause… totally… the whole hand touching idea totally melted my heart …. so I was… like… all over it

The product arrived and I got to work.

It’d be a bit embarrassing to fess up to how long it took, but suffice it to say that Cath’s idea of the hand holding kids that totally guided my creative process that evening.

Of course, I put some of my own little touches to it – the card’s overall design, how the chipboard kids anchored the card, the color scheme and sentiment.

And I also came up with a little chipboard trick.

See, Basic Grey made these cool little boy and girl diecuts to compliment the chipboard pieces in their Mellow line. I was just going to place them right on the chipboard, but I tinkered a little and found you could get a nifty shadow effect with the chipboard by just placing the die a little off the chipboard piece. For myself, it was one of those, “Doi!!!! Why didn’t I do that sooner? I like the look” kind of moments.  🙂

Anyway, I finished up the card, sent a picture to Cath and it was approved the next day.

Off in the mail it went the folllowing day.

I filed the project in the back of the mind.

A few months have passed, and now the magazine is here.

And guess what? There’s the project on the cover. 🙂 (If you are looking for it, you can get it though through Paper Crafts by clicking here.)

And, yes, my name is listed as the one to have designed it. But really it wasn’t just me. It was Cath, too. It all started because of her idea. 🙂

Yep, the blogosphere sucked me in again, but I am back now. 😉

It has been a busy couple weeks.

With the family. And with friends.

And along the way made a little trip to great state of Utah. I got to spend a lot of time with friends (although, a total bummer for me was I didn’t get to see my buddy, Mer), but I did have a great time.

1. This is quick, easy card with limited supplies, limited everything, while on the road. It went with a big bowl of chocolates that I left with some friends in Utah. 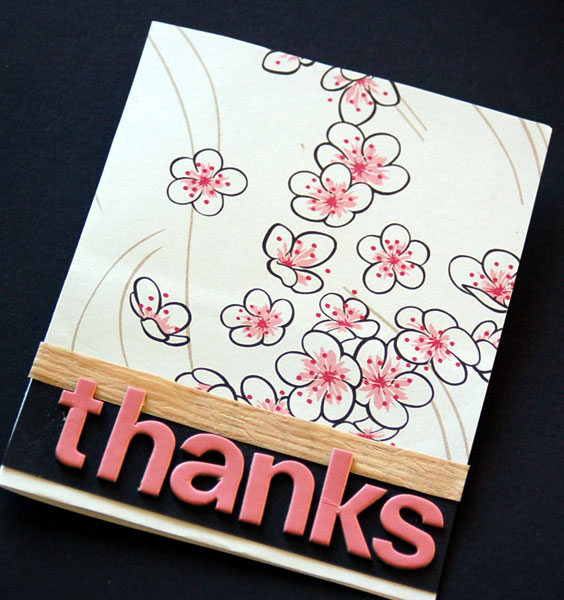 Patterned paper is from Masterpiece Studio. Chipboard letters are from Heidi Swapp. That bamboo-like looking ribbon is from IKEA.

Time it took to make: 45 minutes. Time it should have taken me to make: 10. Blame it on my inner desire to overly tinker. 😉

2. My friend, Nat, has a new blog, where she’ll feature all kinds of good ol’ DIY projects. She’s a Jill of all trades, who can do just about anything with class and frugality. Anyway, check her out  here. The girl has a wonderfully crafty mind.

3. Karen at Art Declassified has a great tutorial up that relates to the slider gum packs we made as make and takes during CHA for her booth. She used different stamps, but the concept is the same. If you’ve ever wondered how to make a slider (or are looking for a new twist on sliders), check her out here.