* These are some cards I made for my friends at Powder Sensations. 🙂  The cards were created with their Flower Frenzy and PS 3 Alphabet clear stamp sets.

The ink pad I used to stamp the flowers with was homemade. I spread three different reinkers on a piece of foam. I let the ink soak into the foam and then used it as my ink pad.

* This is a small pup-themed gift set I made last week. Again, it uses stamps from Powder Sensations. This time, I used the Doggie Paw set. 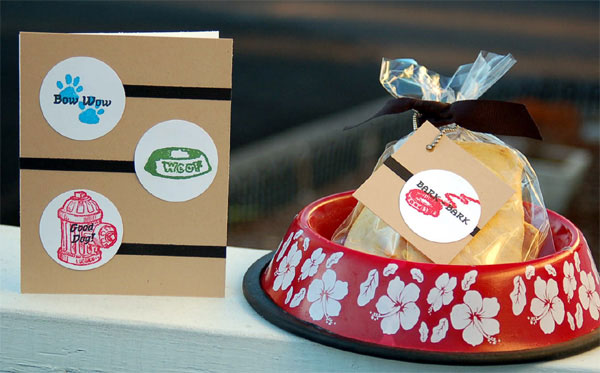 Salt and pepper for taste

Preheat oven to 350 degrees. Partly thaw the hashbrowns. Mix potatoes, soup, sour cream and cheese together. Spread in a large pan. Add salt and pepper to the top for taste. Bake for 1 hour.

Yes, your eyes are not deceiving you.

I feel like my cool factor has gone down quite a bit. 😉

Those are bowling shoes in the picture.

And they are mine.

It’s a little secret I’ve had now for a month. Ok, maybe not a total secret as a few of my cool CX chat pals know, but most people don’t.

I am indeed bowling.

With a team even.

Let me just say: I stink at it.

I got guilted talked into joining the team. The girls needed a bowler… and, well, they pretty much knew no one else who would even consider it.

Three weeks (officially) into the season, I can’t say it’s been a horrible experience. It’s actually been kind of fun.

Ok, I did score 68 one game, which was kind of embarrassing. But I have steadily improved, even scoring a 120 and 115 this week. A couple practice rounds go a long way, I guess. 🙂

In other random Teri news:

* This makes me giggle. I am giving the movie business one more try… lol. Went to a casting call this morning for extras for another movie that is being filmed here. Will share more details if anything comes of it.  Chances are nothing will, but you never know. If I do happen to get a callback to be an extra (which is pretty much the equivalent of being breathing furniture), I’ll share more.

Be sure to check out the rest of the site. Oh yeah, and head over to the Paper Crafts site, too. They are up to lots of fun WCD stuff over there. (Hint, hint: check out their blog at www.papercraftsmag.com/blog). 🙂

* I am totally bumming over the departure of Scatty as the design team coordinator over at CreativeXpress.com. In my opinion, it’s such a loss for the site to lose her in that role. Loss for the team and for the community. I know though she’s got a bright future ahead of her and will do GIGANTIC things.

* I’ve been on a big card making fest for a few days now. Just lots of stuff to do.

Here are some quick stamped cards I made the other day. They are so not fancy, but… really… I just needed some b-day cards fast.

The sentiment stamp is from Savvy Stamps. The cupcake is from A Muse Art Stamps. The patterned paper is from Sonburn.

Went on a self-imposed computer break for the weekend. Felt so good to let the emails go by the wayside. 🙂

Spent a little time creating over the weekend. I thought I’d share a quick, simple, little stamped card I made during my playtime. 😉

All stamps here are from the Fred Loves Lottie set by my pals at Art Declassified (www.artdeclassified.com). The image of the awesome couple was created from an actual photograph.

I think this stamp set is one of my absolute favorite sets of their’s. I find I grab it a lot. 🙂

Lots going on this week. Will share more later. 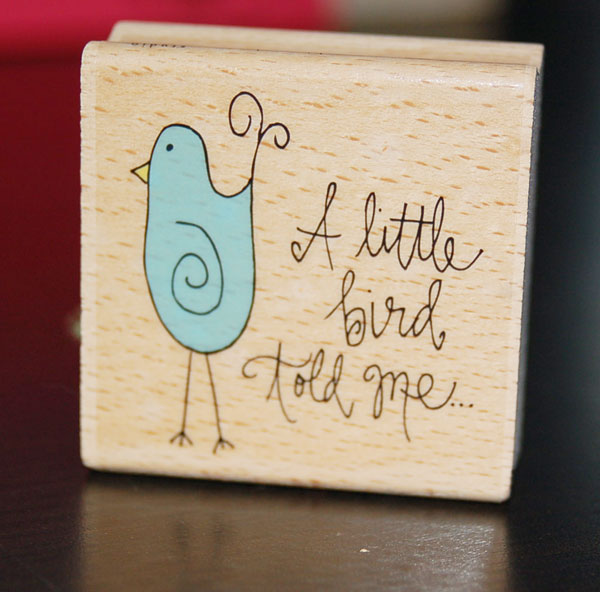 See the bird stamp above?

Took me a whole month and a half to find it. Fell in love the second I saw a picture of it online. I knew it would be mine.

Frequent trips to the store locally and search efforts by friends in 2 other states resulted in me just about giving up. So imagine my surprise Saturday when I stop by the store to pick up something for my mom and see it right near the register.

It cost a whole dollar.

It feels so good to organize a bit. It makes me feel like I’ve turned a new leaf.

I feel like I am always organizing, but it’s really just a little at  a time.

Last week, I decluttered some of the kitchen drawers.

I used last night to tackle some scrapbook stuff.  I filed some of my old pub’d and DT cards and paper crafting projects into 6″ x 6″ albums.

They’ve just been sitting in a canvas box for awhile.

Anyway, here’s a peek of what a small part of desk looked like at one time last night.

There is much more file still, but I think that will be on my list next time I do the organizing thing.

I don’t really know what to say.

I have had many friends contact me since last night, telling me how sad they are and they just want to hug me.

I really don’t know what to say at all, but I feel like I need to say something. I’ve tried to respond to you all, but I am completely overwhelmed by your kindness. Completely. It has completely taken me by surprise. I went to bed with a box of messages and woke up with a bunch more.

You know, the chips just didn’t fall in my favor this time. That isn’t a necessarily a bad thing. For you or me. It’s good for the community to have some new people in the DT role. It’s cool for me, too. You never know what is lurking on the horizon or what tomorrow will bring. I know that’s all cliche, but I really do believe that. Things change and new opportunities happen all the time.

Anyway, thanks, you guys.  I appreciate you more than you know.